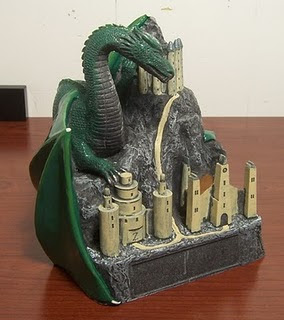 One of the joys of creating and running a convention like the NTRPG Con is the ability to actually influence people's gaming habits. Whether it's the fact you've managed to convince gamers from all around the US (and some from out of the country) to attend your little shindig, or the fact they sit around meeting and gaming with old school gaming luminaries like Rob Kuntz, Tim Kask, Paul Jaquays, Steve Winter, Dennis Sustare and others, or maybe they will be introduced to a RPG they would have never thought about picking up like The World of Urutsk or Swords & Wizardry...well you get the idea. It's a little like being a DM, setting up the convention (dungeon), giving people choices and watching them decide what to do with those choices....except unlike a dungeon adventure there is no chance for a TPK.

Besides the fun of bringing old school gaming to a bunch of really great gamers, through our association with Rob Kuntz the NTRPG Con was able to begin a tradition that I hope will go many, many years (well, at least ten years, as this is as long as we have guaranteed to run the NTRPG Con). The Three Castles award was created by Rob Kuntz and Doug Rhea, and it's purpose is to recognize excellence in gaming design. The three castles in question---Greyhawk, Blackmoor and El Raja Key---were the three original megadungeons, and their legacy has influenced fantasy roleplaying to this day.

Here is Rob's original post explaining the award; below is the criteria for the award, which can also be found on the NTRPG Con website.

Needless to say I'm very proud to be part of this award and of the process itself. I hope everyone reading this who has published something since October of last year throws their hat in the ring. The award is absolutely beautiful and an incredible item to have upon your shelf looking down on you....don't miss this chance to be part of the first ever Three Castles Award.

1) This is an RPG award. Qualified works must be printed and bound (*) and
include the following categories: RPG rules, settings, adventures, sourcebooks
and/or combinations of these. No fiction, board games, miniatures, electronic
media, magazines or loose game aids (cards, screens, etc). Where the design is
unique and might make use of a board or other unique components, please
query with a detailed synopsis and sample copy of the work. Enclose an SASE if
you want the sample returned.
(*) Only the following binding types are acceptable: hard bound, perfect bound, saddle-stitched
(at least 2 staples), spiral bound and comb.
2) This is a DESIGNERS award. Companies may submit titles from their author
base, however, if a win occurs the award will be sent to the lead designer. The
plate attached to the trophy will be inscribed with up to two (2) designer names in
the cases of co-authorship. The press release regarding the win will specifically
mention the company name with address that the product was published
through. An entry is automatically disqualified when no designer name appears
in the submitted printed work.
3) No more than two (2) titles may be submitted by any one company or
independent designer in a year.
4) Submissions open October 1st and close December 31st. All published works
from the current year and those published in the last three (3) months of the past
year can be entered for consideration. Final Publication Date Range: Oct 1st
(previous year) to Oct 1st (current year).
5) This is a multi-stage qualification process. Each entrant must initially submit
two (2) copies of each work that they wish considered. Submissions will be
reviewed by the Steering Committee for the final round. If the entry(ies) makes it
to the final round starting January 31st you will be informed to submit an
additional four (4) copies of each work that qualified for final adjudication (note
the 3C Award Judges below). You will be informed by email and mail that one or
more of the entries made it to the final round. The cut-off date for us to receive
your additional copies is February 15th. The Judges’ final decision will be
received no later than May 1st. The winner will be announced at NTRPGCON in
June. All dates are final and if not met will unfortunately disqualify entries from
further consideration. Unless otherwise noted submitted materials are not
returned to the entrants. We strongly suggest that you purchase tracking
services for parcels you send to the 3C Award Steering Committee.
6) There can be only one (1) award awarded per year. This is an award for true
excellence in RPG design. As such the guidelines for adjudication are detailed
and stringent. The 3C Award Judges may rule that no entry qualifies to be
awarded and thus no award would be issued that year.
7) Complete the following entry form in full once or each title submitted and
enclose it with the mailing(s). This form is not required for the final round
(additional) submissions.

The full info on the award can be found here at the NTRPGCON website.
Posted by Badmike at 9:53 AM 1 comment: