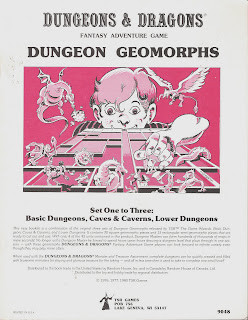 So, since my first work on this way back in April, I've finished the first level of my megadungeon, had an adventure in my megadungeon, found a town/village I want to use, drawn a map for my sandbox area of 270 x 150 miles, and started fleshing out lots of areas. I am not getting too detailed on anything as I want this to be mostly seat of the pants, although I am recycling and borrowing a lot of "set piece" dungeons I can plop into the wilderness, both for my own enjoyment and hopefully to tweak the old school memories of players. So far I have taken a lot of the old Dragon contest winner dungeons of the early 80s and plopped them into locales...Forest of Dread, Citadel by the Sea, and Mechica await discovery within my sandbox area!

Just to update my purpose here, I wanted an easier, quicker adventure setting to run when my group couldn't get together, or I had random people populating my gaming table and didn't want to include them in my regular campaigning. Something quick but fun that I could pull out and run at a moment's notice, but enough "fiddly bits" that it would amuse me. I use 2E, with lots of fiddly bits, so I streamlined it down to a manageable set of rules, limited characters and races to mostly archetypes, and tried to get character creation quick and simple. While not as easy as running, say, Swords & Wizardry or Labyrinth Lord, I was able (with help from friends who took on character creation to work out the kinks) to get it down to 5-15 min (5 min for a simple fighter, 15 min for a paladin which had more decisions to make that I thought for his creation). With some practice I think I can streamline it even more. I'll have more on my rules systems, character types, etc in later posts. I tried to use as many random charts and lists as I could for ease of character creation, while allowing some choice. I just didn't want to bog down the process too much, while still keeping some of the aspects I enjoy about my own campaign world and the home brew rules system I use.

For the first adventure, I was able to write up about 40 rooms in the SE corner of my megadungeon (which, btw, in my search for simplicity is taken entirely from the classic D&D Dungeon Geomorph tile sets!) with the use of random charts and my imagination, and decided to wing it if they went any farther (I wasn't too worried, they were all first level and wouldn't survive too deeply into the depths). I'll have to think of a catchy name for the dungeon; for right now, it's the "Dungeon in the Desert". Here's the reason why, plus the initial set up:

On the edge of town, in front of the watchtower of the church of Kazull, stands a gate that leads to an underground dungeon. The dungeon is apparently vast and ancient, and is in some other part of the world, as those who have made it to the surface speak of a vast desert area (unlike the sylvan wilderness where the village and environs are located). The dungeon is located underneath ancient ruins, in a desolate sand desert with temperatures 100 degrees or more. Nearby, on the surface, is a stronghold of the evil priesthood of Inari, but the priests curiously show little interest in adventurers or the ruins. There is a small oasis nearby, but nothing else for many miles except for rock, sand and waste. Explorers say that if you travel far enough you get to the tall and unscaleable walls of some massive cliffs, surrounding on all sides, indicating the entire location is in a rift.

The gate was found one day several years ago. It apparently appeared out of thin air, as it was visible one morning on the outskirts of town. Curiosity drove many to investigate, where they found it led to some underground cavern. However, the gate is two way and soon fell creatures began emerging to terrorize the townfolk. The local authorities appealed to their duke for help, and he sent several troops to deal with the menace. They realized they were over their head as the creatures kept emerging. Responding to entreaties for aid, soon the church of Kazull built a temple in front of the gate to deal with any emerging creatures. They were joined by the priesthoods of Nythiir and Vistna who also set up nearby temples. War with humanoids and evil barbarians took up much of the duke’s time and men the last decade, so little could be spent fortifying the gate area. However, the gate began to attract visitors in the form of adventurers, and they were able to keep the monster population controlled, along with the help of the various priesthoods.

The dungeon dates from pre cataclysmic days and is the source of much treasure. It also is the source of many creatures of evil temperament. Since the mysterious gate opened, many gems, rare art, and magic has been brought out. However, many adventurers have entered never to return. Others have emerged rich beyond belief. Your destiny awaits!

The three priesthoods mentioned, btw, are the three main branches of religion that can be followed by PCs, and each church has a few special abilities available to their priests (Kazull-Battle, Nythiir-Healing, Vistna-Knowledge). Anyway, I've always wanted a deserted, forlorn, isolated setting, and the Dungeon in the Desert does this, while leaving escape back to a cozy and comfortable tavern and village if they make it back to the gate in one piece. I haven't worked out a ton of the logistics, but I figure the gate is a hazy shimmering in the air about 12 feet high, roughly oval in shape, surrounded by a small constructed archway/entrance (so some poor farmer or sheep herd or drunk doesn't stumble through on their way out of town by accident). Probably a contingent of city guardsmen and a few random priests in hastily constructed stone or wooden buildings about 100 yds away in case something nasty happens to stumble through from the other side. A small "waiting" area where people can hang out (or camp out) while waiting for friends or companions that have entered, or where loners can mill about looking for a possible group who is short on members, or other single adventurers like themselves, to join up with and try their hand at finding treasure and adventure. Perhaps at one time vendors and salesmen set up makeshift tents nearby to sell food and supplies to adventurers, but I've decided they are no longer allowed due to several incidents (plus, the shopkeepers in town protested vigorously as they were losing business to these fly by nighters). City guardsmen gruffly enforce the "move along, nothing to see here" attitude by knocking down any structures put up and arresting anyone selling items outside the walls of the town.

The first approach goes something like this: the PCs approach the gate area from the village, walking slowly to the hill where the tower of the Kazullian priesthood stands like a lone sentinel against whatever might emerge from the shimmering gate. As they get closer, a couple of adventurer types, covered with sweat, blood and dirt, walk past them, too exhausted to raise a hand in greeting as they head for the village to spend whatever gold or gems they found in the depths on drink, healing, sleep and a bath, in that order. A hundred yards away from the gate the makeshift wooden and stone buildings show some activity as priests and off-duty guardsmen mill about, fixing something on a pot suspended over a fire. A small knot of city guardsmen near the gate throw dice and laugh at the results as the players file past them to the waiting area. A few unsavory looking thief types, and a hulking barbarian, are sitting on large rocks and bedrolls eying the party as they troop right past the waiting area to the gate itself. Framed by a crumbling stone "doorway" that arches over the area, the 12 x 12 area seems to shimmer and haze like a mirage...the countryside beyond can be seen through the gate, but it's as if through a gauzy veil...if the stone archway wasn't in place, and unwary traveler might just stumble inside by accident.

When the gate is entered, the party is in the entry room of the dungeon.

The atmosphere immediately changes, and you realize you are underground. A dank, musty, wet sand smell fills your nose. Someone has placed a large rock with a continual light spell in the ground about 15 feet in front of you, and it gives off it’s illumination against the dark.
Behind you is a solid wall of rubble dozens of feet high…the gate you came in from appears to lead into the rubble as if a tunnel, although you cannot see the place you just left (just as you couldn't see inside the cavern from the other side). In front of you and all around you are the remains of dozens (hundreds?) of battles, bones and broken weapons and pieces of equipment in the churned up sand that seems to be permanently stained with blood. Many battles have been fought in this area, some recently if the stench of death is any indication (joined by the stench of bat guano, a colony must reside on the ceiling here).
You get the impression of a large, high chamber, surrounded by blackness…the ceiling slopes upward at the edges to rise to a height of about 70 feet in the center. Behind the range of the light there you can see small shapes squirming on the ceiling…bats, many of them. Far above you can see a very faint sliver of light…..some sort of natural chimney must lead out to the surface. Outside the range of the artificial light, all is darkness except to your right (which you immediately label as East, despite any evidence for or against). About 90 feet away, you see several burning torches set behind what looks like a constructed stone wall about 6 feet high with a wooden door in the center. The wall extends for 100 feet or so and forms a semi-circle around a large stone wall. You can make out human shapes behind the wall at intervals, and they shout a warning at your arrival, giving the impression of alertness.
To the left, more ominous sounds, the rumble of humanoid voices and whispers from beyond the range of the light.

I had two players, one with an elven mage (he told me he had never run a mage before), the other with a Paladin of Nythiir, and the group was filled out with a dwarven fighter, a human thief, and a human priest of Kazull, God of Battle....more on their first foray later! Rolling up the mage was fast and simple, the paladin took much longer, most of that my fault, as I had not reckoned on someone wanting a paladin first up (like I said, my fault, but it was good practice and now I've streamlined the paladin creation). A party consisting of fighters, thieves and mages would be pretty quick to work up; clerics (and paladins by extension) take a bit more time to create due to religious considerations (each of the three priesthoods you can follow gives you special abilities). However, once someone is familiar with the three priesthoods, that won't take much time either. My goal is to be very Retro-cloneish or Simulacrum-like and have it down to five minutes or less (actually, you can have a fighter or mage up and running that quick or quicker already).

More on their first adventure, and some of my character types, later....
Posted by Badmike at 12:52 PM