Every year the NTRPG con sponsors a raffle to help fund the convention.  We lose money every year to bring old school gaming to all the great gamers out there, so no surprise.  This year, however, Doug informs me we are about 250 tickets off the pace!  We have already had a 30% increase in attendence from last year and expect to have a massive walk-up, so the problem is not in number of attendees. I have heard from quite a few people they will buy tickets at the door, and that is appreciated.  Yet our sales to people not attending the con are nearly microscopic.  You do not have to be present to win any of these great prizes!  Last year our Free Trip to NTRPG con was won by a non-attendee.  Please think about dropping $10-$20 on a few $5 tickets if you get the chance! You will be supporting old school gaming and have the chance to win a few great prizes. 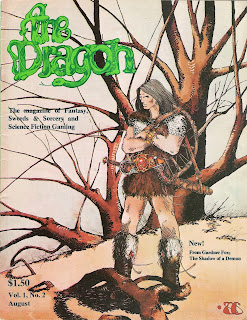 NOTE: At this late point, you can only purchase tickets at the event!

Items for the Raffle (additional items will be added as they arrive)
You do not have to be an attendee to win
* Dragon Magazine #2
* Dragon Magazine #3
* Dungeon Magazine #1
* Castle Zagyg - Upper Works (signed by Jeff Talanian)
* Strategic Review #1
* A Complete Set of the new 1st Edition AD&D Reprints (Players Handbook, Monster Manual & DMG)
* Swords & Wizardry White Box
* DCC #9 Tomb of the Blind God, Otus Cover w/NTRPGCon Logo (2ea, signed by Erol Otus)
* Jim Holloway special Limited Edition art set from Cairn of the Skeleton King, 13 prints per set (2ea)
* Pacesetter's V2 Palace of the Vampire Queen reprint (2012)
* Artesian Dice Polyhedron Set of 10 carved wooden dice in a wood box
* Set of Jeff Dee's Egyptian Art from Deities & Demi Gods prints
* Limited Edition Centerstage Miniature for NTRPG con 2011 - Lord of the Great Plains - Longhorn Minotaur
* Limited Edition Centerstage Miniature for NTRPGCon 2013 - The-Thing-That-Should-Not-Be
* Digest size copy of Misty Isles (Wee Warriors adventure reprinted by 2012 NTRPG con)
* Three different sets (bags) of Dungeonmorph Dice, Five D6 dice to a bag
* Rules book for the DCC RPG (Collector's Edition)
* Miniature painted by artist Angela Imrie
* Free Trip to NTRPGCon 2014 (within 48 contiguous states); includes airfare/gas (if you drive) & hotel room. If winner is not in the USA, we will award cash value reimbursement if you attend in 2014, non-transferable (basically this is up to a $700.00 credit toward your travel/stay to the Con in 2014 only)
Posted by Badmike at 9:03 AM